The New York Tribune on December 4, 1869, featured an advertisement by Nathan Meeker, the paper’s agricultural editor:

“I propose to unite with the proper persons in the establishment of a colony in Colorado Territory…The persons with whom I would be willing to associate must be temperate men and ambitious to establish a good society.” 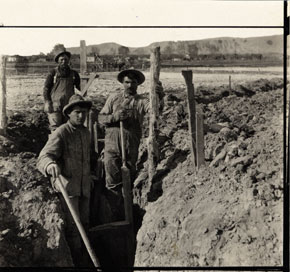 The Colorado Territory offered a chance to start over and to build a new life. Meeker envisioned a middle-class community and sought settlers who abstained from alcohol, were literate, and possessed “high moral standards.”

In April 1870, 144 families traveled westward on the railroad to settle in “Union Colony.” This new society gained national publicity through the support and praise of Horace Greeley, editor-in-chief of the New York Tribune, who popularized the phrase, “Go west, young man.”

These settlers ambitiously planned the first large-scale irrigation ditches in the region, utilizing the experience of Meeker, Benjamin Eaton, and others. Within three months of their arrival, the colonists had constructed a working irrigation ditch, dubbed the “town ditch” or “Greeley Number Three”. Even though Greeley Number Three provided a reasonable amount of water to the families’ kitchens and backyards, it was overshadowed by Greeley Number Two, which was built for watering crops.