“Examining the water problem we find the curve representing the population is rising and the curve showing the water supply is gradually dropping…People are on the move to live in Colorado, farmers are to be supplied with water, industry is expanding to use more water and we are going down hill on water supply.” 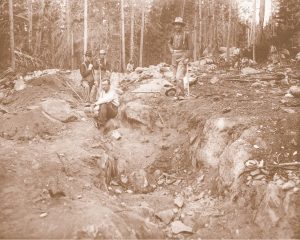 He was prophetic: The Poudre valley’s cities and industries continued to expand. Growing urban centers needed water as did farmers.

As demand for water continued to grow, some feared that it could outpace even the generous addition of water made available by the C-BT project. In the 1950s, new economic activities such as meatpacking, the manufacture of photographic equipment, the brewing of beer, and new computer technology competed for Poudre water. Gravel mining and housing developments changed the character of the river’s corridor. Population growth transformed colleges into universities. Leisure pursuits challenged the role of agriculture as the leading source of revenue in the region and state. Newcomers moved in, suburbs replaced farms, and water rights were acquired by municipalities to supply urban households instead of rural lands.

During the 1960s and 1970s, Americans began to re-evaluate their understanding of the natural world, focusing on environmental preservation and protection. Locally, biologists identified pollution resulting from the dumping of sewage and industrial waste, farm fertilizer and pesticide runoff in the Poudre. Old canals that passed through neighborhoods attracted debris, and water seeped into basements. Some citizens viewed water structures as man-made hindrances to an otherwise natural river.

Also, the Poudre became the focus of outdoor recreation. Several paved trails were built along its banks beginning in the 1970s, attracting students, photographers, walkers, joggers, and bicyclists, while the gentle flow of the river itself draws tubers, waders, and fishermen.

In 1986, the mountainous 75-mile upper section of the Poudre was designated a National Wild and Scenic River. Although “Wild and Scenic” status prohibited dams on that part of the river, the bill reflected a compromise: The lower seven miles within the Poudre Canyon were not designated, leaving that section available for future water projects.

The search for additional sources of water continues. A new storage project, the Northern Integrated Supply System (NISP) seeks to address future demands. This regional project includes municipalities and water districts that hope to increase the quantity and the reliability of water.

The Cache la Poudre River runs through Northern Colorado’s history. Its story is crucial to understand our system of water management, the evolution of our economy and changes in recreational activities.

In 1996, the federal government designated the Cache la Poudre River as a National Heritage Area to recognize the significant role its history with western water law has played both locally and nationally. Today, the Poudre Heritage Alliance works to share this story with residents and visitors so that they will cherish and celebrate the struggle and success of those that came before to lay the foundation for managing this precious resource for the benefit of all.

Enjoy the Cache la Poudre River as you discover its wonders and its story!